17 September 2020 – Three Food and Beverage (F&B) outlets have been ordered to close and 15 F&B outlets have been fined for breaching Safe Management Measures (SMMs). Ten of the outlets were fined $1,000 for breaches, such as allowing groups of more than five to be seated together or to intermingle between tables, and seating groups of customers less than one-metre apart. The other five outlets were fined $2,000 for repeat offences. These F&B outlets are among the 23 found to have breached SMMs as part of stepped-up checks by government agencies during the weekend of 12-13 September.

2 The details of the offences and orders for closure are below (photos are in Annex):

a. On 12 September 2020, officers arrived at Jiang Hu Xia Ke located at 150 Orchard Road, #01-20, Orchard Plaza, Singapore 238841 at 11pm and observed 13 patrons pouring drinks from metal teapots to consume at their tables. Investigations revealed that the teapots contained beer, and the restaurant supervisor admitted to concealing alcohol consumption using the teapots. The bottles of beer sold by the restaurant were also concealed at the bottom of the fridge storing drinks. Under the COVID-19 (Temporary Measures) Act 2020, sale and consumption of alcoholic beverages is prohibited after 10.30pm daily. The Singapore Tourism Board issued an order on 15 September 2020 requiring the operator of Jiang Hu Xia Ke to close the premises from 16 September 2020 for a period of 10 days until 25 September 2020 (both dates inclusive).

c. On 13 September 2020, Frog Meat Fish Head, located at 5 Mosque Street, Singapore 059485, accepted a booking of 10 patrons and seated the group at two tables within a private dining room. This was observed by officers when they arrived at around 10pm. When asked, outlet staff claimed that the people at the two tables did not know one another. Upon further questioning, the patrons admitted that they were colleagues. The Singapore Tourism Board issued an order on 16 September 2020 requiring the operator of Frog Meat Fish Head to close the premises from 17 September 2020 for a period of 10 days until 26 September 2020 (both dates inclusive).

3 On 16 September 2020, government agencies conducted additional inspections on 57 F&B outlets in known hotspots. Among these, seven were found to have breached SMMs. The breaches involved groups of more than five seated together or intermingling between tables, seating groups of customers less than one-metre apart and the serving and consumption of alcohol past 10.30pm (see examples of breaches in Annex). Agencies are reviewing these breaches and the appropriate enforcement actions to be taken, including temporary closure of the outlets and the issuance of fines.

4 COVID-19 remains a grave threat. Dining out is an activity that involves considerable risks because it entails gathering in enclosed spaces, without masks on, and for a prolonged duration. While the majority of F&B operators and premise owners have ensured that SMMs are properly implemented, there remains a minority which continue to breach SMMs.

5 As announced by the Multi-Ministry Taskforce (MTF) on 9 September 2020, the Government will continue to step up enforcement checks at F&B outlets around Singapore to ensure that they remain safe spaces for all. We would like to remind F&B operators and premises owners that breaches of SMMs constitute a serious offence, and we will not hesitate to take firm enforcement action. We also urge all members of the public to be socially responsible and observe the SMMs. 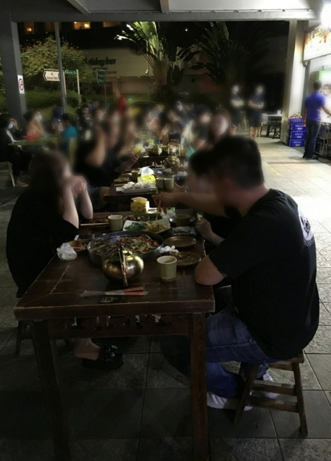