Agencies to Step Up Enforcement of Safe Management Measures at Food and Beverage Establishments and Hotspots; 61 Individuals Fined Over Weekend

Agencies to Step Up Enforcement of Safe Management Measures at Food and Beverage Establishments and Hotspots; 61 Individuals Fined Over Weekend

18 June 2021 – As part of the calibrated re-opening under Phase 3 (Heightened Alert), dining at food and beverage (F&B) establishments, including hawker centres and coffee shops, will be allowed to resume in group sizes of up to two persons from 21 June 2021.

2 Dining-in at F&B establishments remains an activity with considerable risks. Agencies will step up enforcement of Safe Management Measures (SMMs) at these premises to stem the transmission of COVID-19. First time individual offenders face a composition fine of $300. Repeat offenders will face higher fines, or prosecution in court for egregious cases. F&B establishments should have SMMs in place before dine-in resumes on 21 June 2021, and ensure they are complied with thereafter. Operators that breach SMMs, including 1 metre safe distancing between groups of diners, face closures, even for first offences.

4 F&B establishments must put in place the following SMMs (refer to Annex):

a) Ensure and maintain a safe distance of at least 1 metre between groups of diners — the distance is measured between the backs, legs, or edge of chairs used by diners;

b) Not allow group sizes larger than two persons — a group of more than two persons who are not from the same household is not allowed to dine in together at F&B establishments, even if they are split across multiple tables;

d )Not sell or allow the consumption of alcohol after 10.30pm;

f) Not allow singing (either staff or patrons) or live entertainment and games such as karaoke, billiards and dice games.

5 Patrons must also do their part by:

a) Keeping their masks on at all times, except when eating and drinking;

b) Not gathering in groups of more than two persons - multiple table bookings of the same group is strictly prohibited;

c) Not intermingling between groups;

d) Not singing; and

e) Not sitting on cordoned off or marked seats.

6 Patrons queuing to purchase food or waiting for their orders must maintain a safe distance of at least 1 metre from other patrons at all times. All staff at F&B establishments, and stallholders and assistants at hawker centres and coffee shops are reminded to keep their masks on at all times.

7 Over the past weekend, 61 individuals were issued fines for breaching SMMs in parks and beaches managed by the National Parks Board (NParks). These breaches include not wearing masks when not engaging in strenuous exercises, and gathering in groups larger than the permitted limit.

8 All water play areas, water recreational facilities, campsites and barbecue pits in NParks-managed parks and gardens will remain closed until further notice. NParks will temporarily close access to some parks, sections of beaches, lawns, and facilities – such as hard courts, shelters and car parks – when these areas get too crowded or where people remain non-compliant with SMMs, to ensure that the parks remain safe for everyone.

9 Members of the public are advised to check the Safe Distance @ Parks portal (safedistparks.nparks.gov.sg) for the latest updates on visitorship levels before heading to parks. We request all park visitors to be socially responsible and observe SMMs such as keeping to the permitted group size, and to wear a mask except when engaging in strenuous exercises or consuming food, drink or medication, to keep our green spaces safe for everyone.

10 Agencies will also step up enforcement presence at other identified hotspots based on public feedback and ground observations. These include parks, beaches, and common areas of HDB estates such as hardcourts, basketball courts and pavilions.

11 We are at a critical stage of our national fight against COVID-19, as we ramp up our vaccination programme. We seek everyone’s cooperation to remain vigilant, socially responsible and unwavering. If we become complacent or negligent, we could well negate all the past efforts and sacrifices we have individually and collectively made.

MINISTRY OF SUSTAINABILITY AND THE ENVIRONMENT
18 JUNE 2021 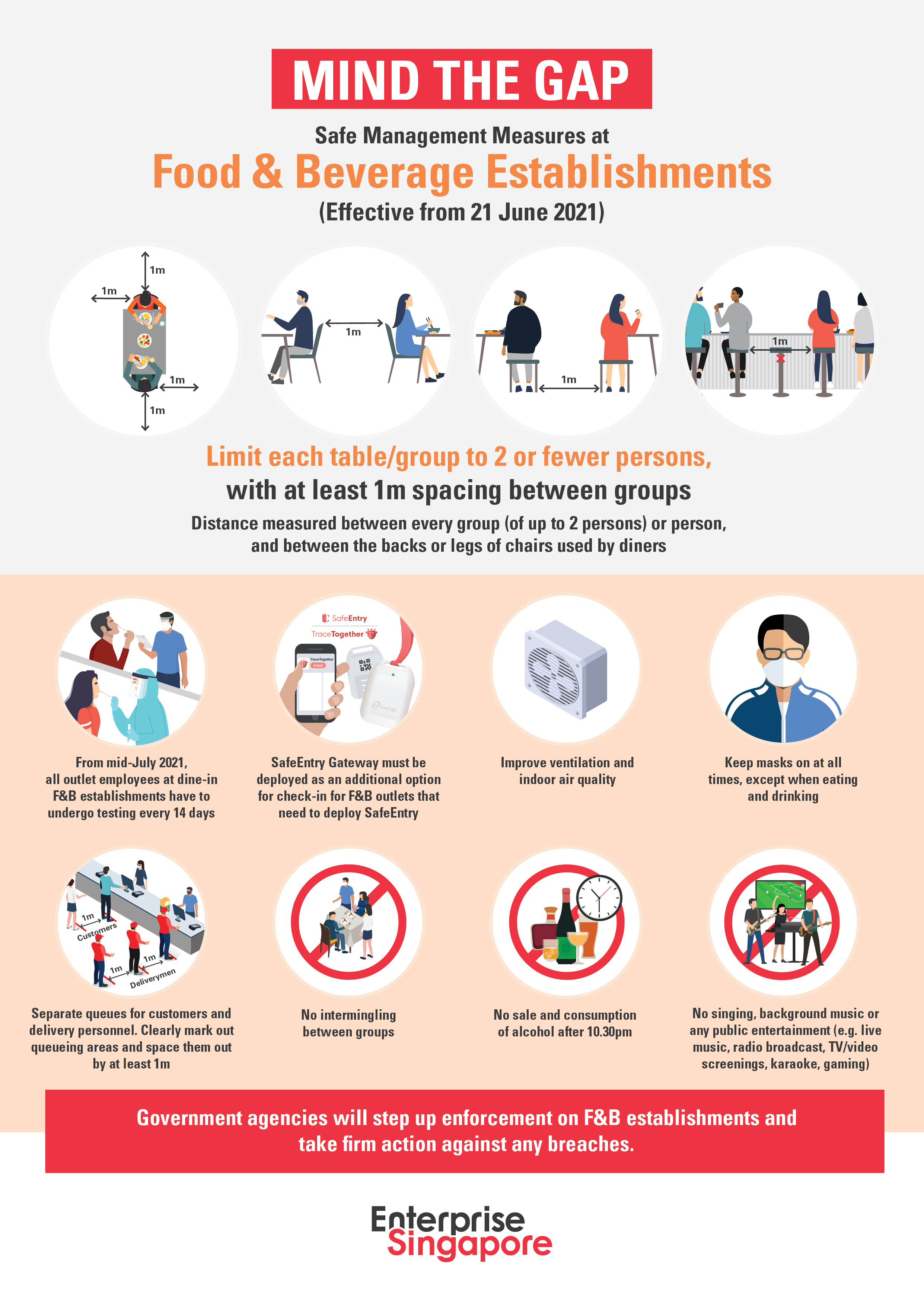